A new version again, download it or use the updater in the plugin. END_OF_DOCUMENT_TOKEN_TO_BE_REPLACED

And another beta for you to try out. END_OF_DOCUMENT_TOKEN_TO_BE_REPLACED 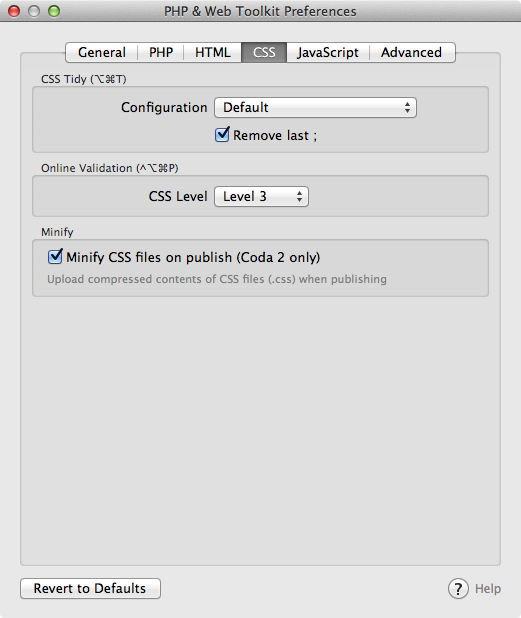 Next beta with a box of bugfixes, improvements and a nifty new feature. END_OF_DOCUMENT_TOKEN_TO_BE_REPLACED

So here’s the new, nice and hopefully stable version of the Coda plugin. Works with Coda 1.7.5 and Coda 2.x END_OF_DOCUMENT_TOKEN_TO_BE_REPLACED

This new beta version now works with Coda 1 and 2, fixes the drawbacks of the previous beta and has some improvements:

END_OF_DOCUMENT_TOKEN_TO_BE_REPLACED

Annoyingly the current version of my Coda plugin worked with all the Coda 2 beta versions, but not the final (release) version. The problem seems to be the non-threadsafe Webkit-View implementation. Since this is can’t be fixed easily I put together a beta version which doesn’t use the Webkit-View.

Limitations of this beta version:

Update: Coda 2 compatible version will be coming the next days, stay tuned.

The next plug-in version will be published after Coda 2 is out and I’ve received some feedback.

It might be possible that new versions will be running on Coda 2 only but I hope that it’s possible to maintain only one version of the plug-in.

I’m also looking forward to some new API functions which hopefully are integrated in Coda 2. These will fix some annoyances in the plug-in and allow plug-ins to do more stuff.

Feature removal: This version doesn’t feature proCSSor anymore. The developer will not continue the proCSSor Web API, so this feature is removed from Coda PHP & Web Toolkit.
Since the API was a free service anyway and he’ll focus on developing his own software this is understandable. More information can be found on his website: procssorapp.com.

And since Coda 2 is said to be released in the near future I won’t add any new features until then. Therefore this version has some bugfixes only.