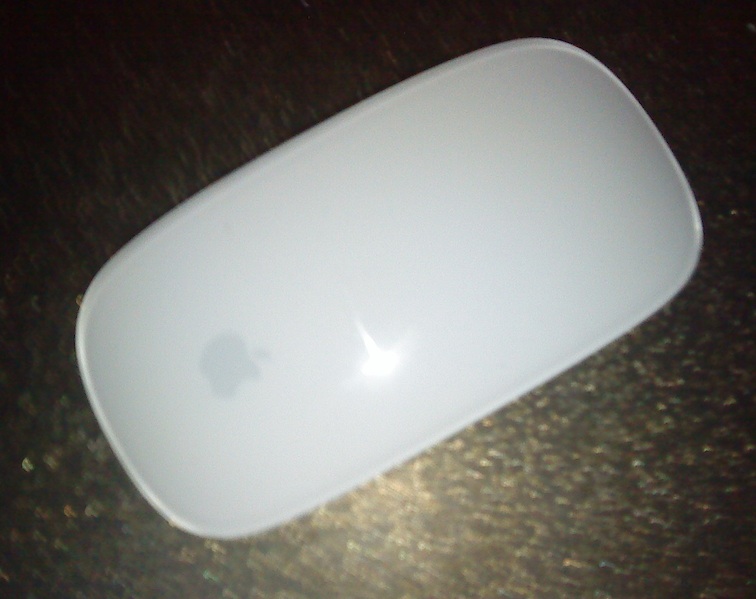 Yesterday the Magic Mouse arrived (yes it’s one of the worst photos ever made, I know) and to be honest, I was somewhat disappointed in the first place.

Design is great, the material feels very good and the concept is really really cool. But there are some annoying things – most of which can be solved via additional software.

First at all, the acceleration is probably useful for 640×480 screens. If you are euphemistic, you might call this “precise”, I’d prefer “very damn slow”. Moving the mouse pointer along the left screen edge you have to lift the mouse – not so cool.

The second thing might be because I’m left handed – I often miss the right mouse button (which was a total desaster with the “Mighty Mouse”, at least it’s better now).

And finally there’s no middle click. You just have two buttons, scrolling in 4 directions and forward/backward movement by “wiping” or what it’s called. That’s not much for a mouse with 2 million or so sensors.

Fortunately there are two freeware tools, which solve most of the problems:

With these tools you can add middle-click again, set the movement speed beyond the apple default max setting (snail on valium) and configure lots of additional gestures.

My other (previous) mouse is the Razer ProClick – the best mouse I ever used by far, but I’ll give apple a chance the next weeks..